‘Kalagora’ comprises of two independent works: a book of poetry developed over the course of eight years and a one-man play that was written and developed since autumn 2010. 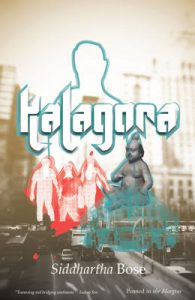 Buy from Penned in the Margins

In this dazzling debut collection by Indian-born poet Siddhartha Bose, the cities of Kolkata, Mumbai, New York and London are transformed into sites of fractured vision.

Bose has created a volatile, dynamic poetics in which love and longing compete with the hybrid, multicultural cityscape. A five-part structure reflects this multiplicity: ‘Prolectric’ and ‘Epilepsis’ book-end sequences on childhood and initiation (‘Sunya’), love (‘Maya’) and the city (‘Nagri’). Kalagora is a Hindi neologism meaning black man / white man; this book tells his story.

“One of the most exciting first collections I’ve come across in a long time … Kalagora bestrides continents and celebrates cities as engines of creativity where dogs talk in hieroglyphs and where a man can be a moth.”
Ian McMillan, The Verb on BBC Radio 3 (download Mp3)

“Emerging fully formed with this exquisitely crafted debut, Siddhartha Bose intrigues, surprises, shocks and seduces the reader, pushing the text to the edges of truth. This is a guttural, painfully honest text, yet at times tender and emotive, the sound of the poems creating a form of sculpture for the ear. The book spans continents and cities: Calcutta, Bombay, London, New York. A truly contemporary work which does what good poetry does best: to make the personal universal and the international local.”
Anthony Joseph

“Traversing and bridging continents, juxtaposing unusual syntactical relationships, Bose in Kalagora cleverly interweaves the politics of colour — black, white, brown — where race is both a metaphor of separateness and metropolitan co-existential chic. There is multiculturalism, romanticism, orientalism; travel, rebellion, jazz; fantasy, love, sex. Kalagora is one of the most impressive debut volumes I have read in recent years.”
Sudeep Sen

“Forget the usual flimflam about the ‘potential’ of the debut collection; Kalagora introduces Bose as a poet well into his stride. These emanations from the author’s token cities tentacle back to a kind of electrolife that sustains the entire collection. Here, amid filmic precision, extraordinary dare and constant ingenuity, Bose directs a vaudevillian array of seemingly apocryphal characters that come and go with metamorphic freedom. This is rampantly active and radioactive poetry; crammed with shock visions and a siege of narratives. The cumulative effect is powerful and intense; Kalagora is a vital book of poems for the 21st century.”
James Byrne

“There is a sense of an Odyssean voyage, a continuous exile, full of temptation and danger […] This is a collection that is always dramatic, always in tune with the sensational possibilities of language and the spectacular turn of phrase […] fusing cities together and describing a planet that is globally interconnected and globally aware.”

“Bose is also a “hybrid” poet, in the post-colonial sense of the term – his work in Kalagora aiming to merge, bridge, fuse, and intertwine (as they say), the diction, themes, and experiences, of various centres’

“Kalagora is an incantatory assertion, if not of identity, then of power and confidence in moving through identities. […] The book ranges across India, London and New York, negotiating traditional and contemporary cultures with a confidence which doesn’t feel at home anywhere, but is prepared to make claims anyway.”

“Pitting the surrealist against the Romantic, Bose carves out a mongrelized but fruitful crop, proving with Kalagora that a new and vital generation of ‘diaspora’ poets is desperately needed to forge new models among the tired ways of thinking about race, distance and the ‘immigrant experience’.”