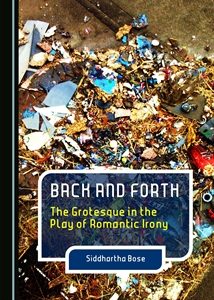 Praise for Back and Forth

“This adventurous and persuasive book takes new routes through the vertiginous landscape of European Romantic theory. Bose finds a future for the speculative energies of the Jena Frühromantiker in the grotesque practice of Hugo and Baudelaire, and in the persuasive 19th-century use of Shakespeare to justify a world-view radically inclusive of difference, conflict and variety. Ambitiously, Back and Forth proposes that the Romantic undercutting of old certainties can be usefully seen as anticipating the ironies of modernity and its playful postmodern aftermath”

“In his erudite and closely argued Back and Forth: The Grotesque in the Play of Romantic Irony, Siddhartha Bose develops a deep and richly illuminating genealogy of the modern grotesque seen as essentially dramatic, transgressive, and rich in Romantic irony […] Bose’s genealogy brilliantly illuminates the particular elaborations of the grotesque in the the Schlegels and diverse French Romantics, and it also offers fresh and valuable perspectives on English aestheticism and the emergence of the modern. In particular, superb readings of scenes from Shakespeare and of Baudelaire’s “De L’Essence du Rire” highlight the neglected performative and dramatic elements in the grotesque, and his readings of the Schlegels similarly highlight the neglected Romantic irony inherent in the modern grotesque.”

“This impressively ambitious study charts with energy and imagination the emergence of the idea of the grotesque out of Romantic irony. It adds substantially to our understanding of the connections between Romantic theory and its aftermath in the literature of the Modern period.”

John Whale, Head of School and Professor of Romantic Literature, University of Leeds