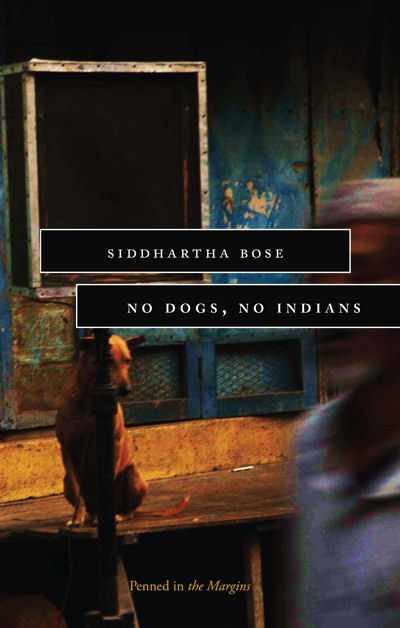 Cover design by Penned in the Margins
Photography by Siddhartha Bose

No Dogs, No Indians was commissioned to commemorate the 70th anniversary of Indian independence, and played to sell-out crowds at the Brighton Festival, Southbank Centre, Norwich Arts Centre, Live Theatre Newcastle, and the Edinburgh International Book Festival.

How far would you go to resist oppression? What would you choose to remember, and what to forget?

It is 1932 in occupied Bengal. A young revolutionary prepares to storm a whites-only club in Chittagong, an act of defiance that will end in her taking her own life. The sign above the club reads ‘No Dogs, No Indians.’

Decades later, an aspiring actor born in post-independence Kolkata is in love with all things British: Shakespeare, cricket, The Beatles. But as he contemplates the past and imagines his children’s future, he begins to question his own identity.

Now in 2017, a man returns from London on the news of his father’s death. In the New India, he encounters steel magnates, supermodels and tech millionaires, but is haunted by ghosts from the past.

Three intertwining stories explore the effects and legacy of the British in India in a powerful new play by Siddhartha Bose to mark the 70th anniversary of Indian independence.

‘An important play that addresses real issues […] There is a real subtlety in the writing, with no attempt to make this a flag-waving piece for any particular cause […] The sparse set and excellent direction from Russell Bender perfectly convey the differing time periods and proves that lavish stages are an irrelevance in modern theatre. Archana Ramaswamy, Omar Khan and Ashraf Ejjbair handle multiple roles with ease, and Komal Amin is an inspirational figure as Rani’- ★★★★★ Once Upon a Tyne

‘This beautiful work by poet Siddhartha Bose […] The excellent acting makes this into an arresting and exciting show […] the four actors deliver a performance that will keep you on the edge of your seat. Whether this show is your first introduction to Indian history, heritage and culture, or you’re already familiar with it, No Dogs, No Indians will surprise and satisfy you’- Everything Theatre

‘An ambitious if sprawling examination of the deep scars of the British Empire, both personal and political […] in a country used to a sanitised, flag-waving version of its history, where the British Empire is fetishised and its victims erased, the piece should be lauded for its ambition’- The Stage

‘Highly engaging […] if you if you have the chance to catch this play, you should’- Live Theatre Blog

‘No Dogs, No Indians is without a doubt one of the most amazing performances out there, trumping most movies in dialogue, character and plot. I cannot recommend it enough.’- Ravenclaw Book Club

‘Bose is not a historian and does not pretend to be one, but the evening made for more interesting and innovative public history than that of efforts elsewhere […] I can only hope that the kinds of history that Bose attempted to introduce to a public audience in Edinburgh marks the beginning of greater awareness of social, cultural and emotional histories in Britain of the Imperial past and its continued present.’- The Conversation, on the No Dogs, No Indians event at the Edinburgh International Book Festival 2017

‘Plenty of ambition in this sweeping history of modern India – definitely a Brighton festival highlight for me.’

‘One of the best plays I’ve seen in a long time! No Dogs, No Indians packs some punches, amazing stories, exquisite writing, incredible actors’

‘Fabulous performance at Live Theatre. Still thinking about it!’

‘Effervescent performances and an absorbing story’

‘Thank you to all for telling a complex story so honestly and sensitively. Congratulations!’

‘Touching and fascinating and beautifully acted’

Details of the cast available here.